To create marks on a surface expresses a fundamental human desire to mirror and make sense of the world. For the child, drawing is a way of exploring boundaries, of developing perception and notions of ‘I and not I’. Verbal communication offers just a tiny insight into the mind, whilst drawing gives an unspoken glimpse into the psyche. Many of us doodle, but mostly we lose the natural childhood ability to draw and paint, becoming self-conscious and critical. The artist, however, continues to nurture this ability. To foster a tactile and sensual relationship with their materials that most of us have lost. Their gestures, whilst still partly unconscious, articulate a superior visual sensibility, an understanding of equivalences, substitutions, and metaphors.

Two artists for whom the physicality of the surface remains paramount are Frances Aviva Blane and Basil Beattie. For both, the relationship with the body – the reach of the arm, the pressure of the hand, the co-ordination of the eye – is paramount. Form, process and subject are inextricable. The line and mark a graphic, dynamic delineation of their thinking.

Basil Beattie, the older of the two artists, has his sensibility deeply rooted in the post-war New York school of painters. The imagery and feeling of his work owes allegiance to Philip Guston. Over the years, Beattie has worked with a series of architypes: ladders, staircases and ziggurats. The sense of existential alienation is palpable. In these works colour is absent. Black dominates. His flights of steps lead only to ambiguous passageways and uncertain voids. The rungs of his ladders collapse or are bound onto their wooden struts with a savage carelessness. Whilst imitating the appearance of actual things, his iconography has become more abstract, expressing deep psychological dis-ease. This is a manifesto to failure. The dark despair of Sam Beckett – ‘I can’t go on, I’ll go on’ – made visual in a way that only an artist can articulate. For Beckett believed, as Beattie surely does, that failure is an essential part of any artist’s work. The urgency of his pictograms forces us to become witnesses to his powerful psychodramas, ones that are often uncomfortable and overwhelming, but always profound.

Frances Aviva Blane paints heads, but they’re no more ‘real’ than Basil Beattie’s steps and ziggurats. There’s a physical savagery to her mark-making, as if stirring her images out of the ether by spells and incantations. At other times, they feel like forms of decimation or erasure, as if she were angrily quoting T.S. Elliot’s  lines: “that’s not what I meant at all…that’s not it at all.”  Her charcoal scrawls evoke notions of calligraphy, of a nascent language. As in the late Susan Hiller’s work, there’s a concern between the communicable and the incommunicable, the conscious and the unconscious. Blane’s heads – which reverberate like Bacon’s furious, screaming Popes – play with the relationship between the natural and chance, the personal and the social, what is known and what is not. In her dense, scribbled and blotted images there are multiple languages, correspondences and codes. But unlike Beattie’s dour black and white ziggurats and ladders there is, in Blane’s brazen scarlet and bile-yellow blotches, an anarchic, chthonic sensuality that echoes that of Dubuffet, Cy Twombly and the Outsider Artist, Danielle Jacqui.

Both Beattie and Blane ally themselves to the fundamental existential questions of modernism rather than to the irony of postmodernism, whilst being aware of the decentring of the contemporary subject. This can only ever lead to a perpetual series of open-ended questions, to the urgency of making further images and the perpetual quest for sense and meaning.

Sue Hubbard is a freelance art critic and main feature writer for Artlyst. A novelist and poet, she has published a collection of short stories and three novels. Her latest, Rainsongs, is published by Duckworth, Overlook Press, US. Mercure de France and Yilin Press, China. Her fourth poetry collection, Swimming to Albania is due from Salmon Press, Ireland. 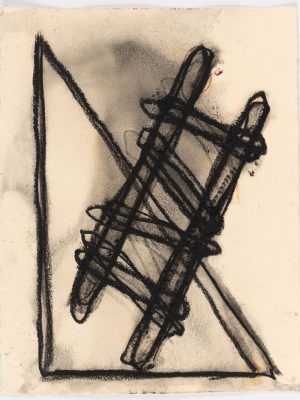 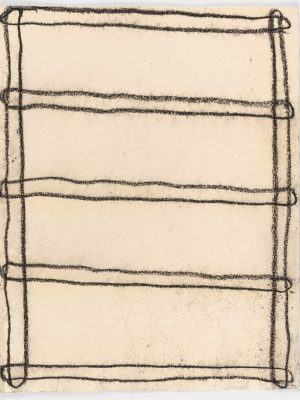 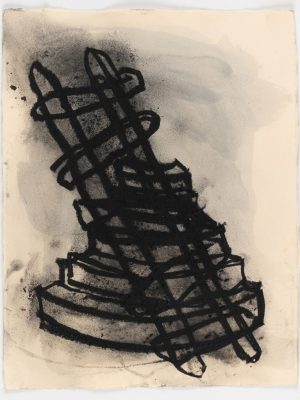 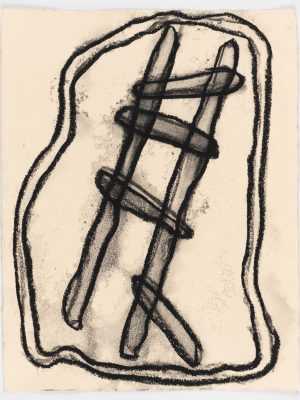 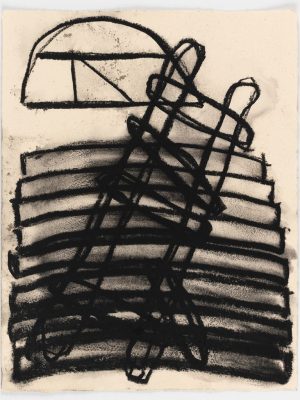 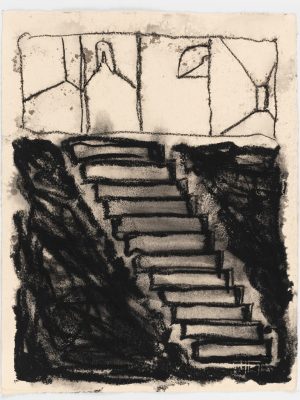 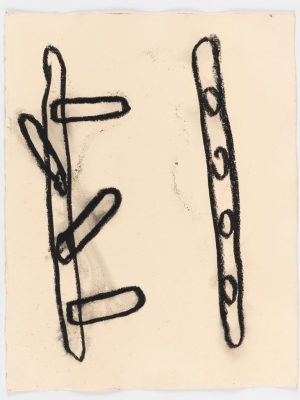 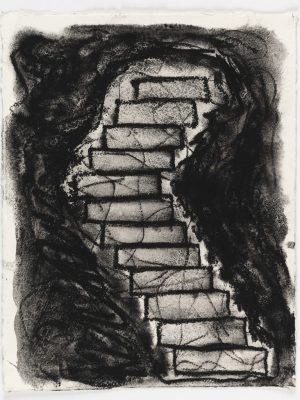 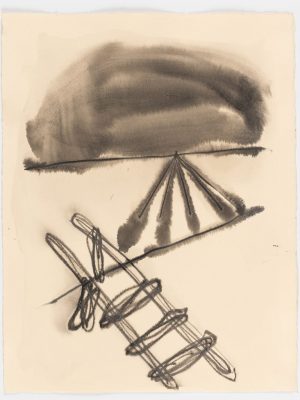 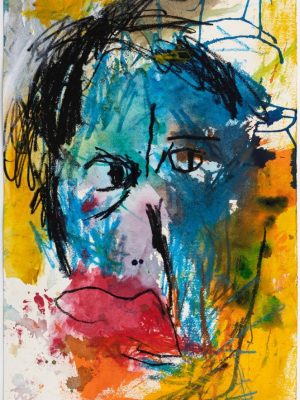 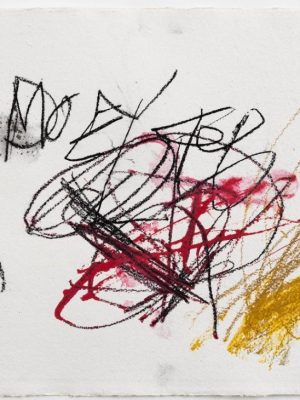 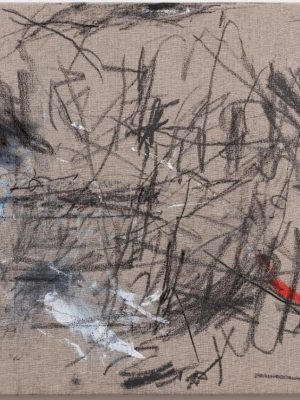 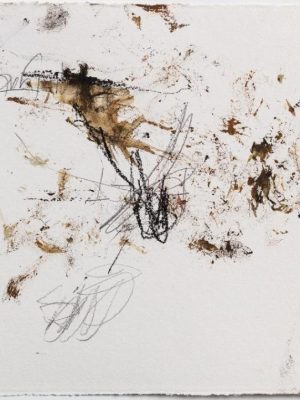 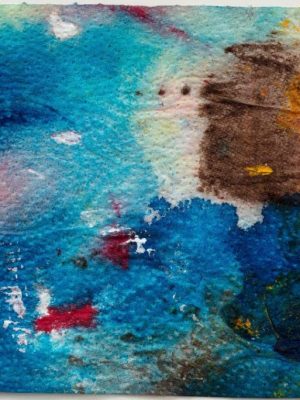 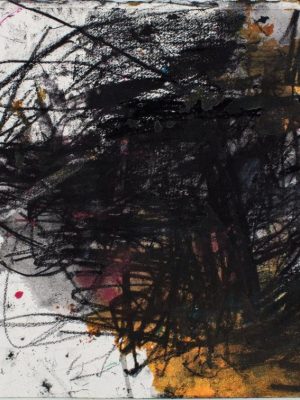 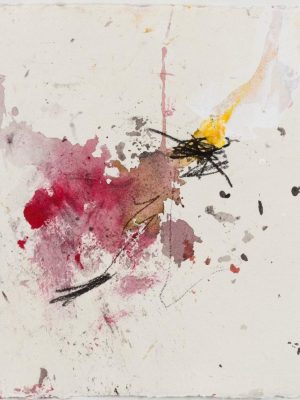 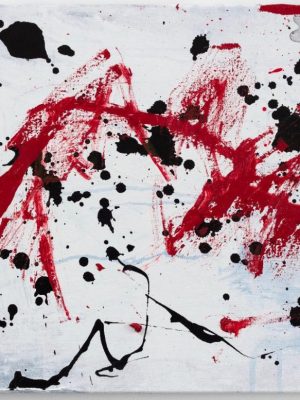 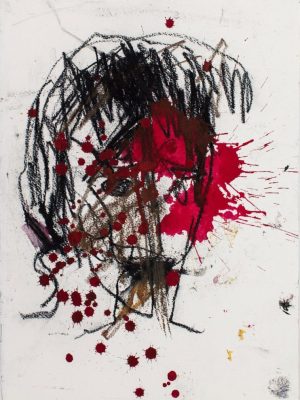 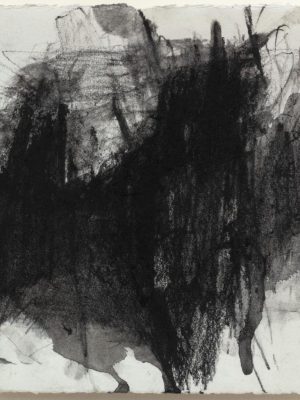 “Abstraction, I think, is now over. It’s run its course, taking away the shadows from European art” wrote iconic British artist David Hockney in a recent edition of The Art Newspaper (30th September 2021). Commenting on the unique quality of pre-19th century art, the chiaroscuro technique in painting, Hockney laments loss of observation through the act of drawing the world and humans, lights, shadows and depths. Hockney makes a good point about the importance of drawing and observing the world which can rarely be captured through the camera, but he is also rather sweeping about abstraction in art. Abstraction transcends the immediately observable, offering ambiguity over the need to be precise, literal, conceptual, narratorial, historical, identitarian or political, which are the current trends in contemporary art.

Basil Beattie was profoundly influenced by Abstract Expressionist art that grew out of New York between the late 1940s to 1960. His work, however, isn’t pure abstraction. Beattie’s work is replete with symbols. Steps, ladders, corridors, entrances, doorways, tunnels, pathways, ziggurats. Geometric shapes also feature, drawn without precision. While his art is not driven by narrative or place, an immediate association which his images conjure up is the Biblical story of Jacob’s Ladder: “And he dreamed, and behold a ladder set up on the earth, and the top of it reached to heaven: and behold the angels of God ascending and descending on it.” Genesis 28:12

This mythic, redemptive story of Jacob’s dream of seeing a ladder leading from earth up to heaven affirms the connection between God and man, and His chosen people, the Israelites. The other recurring symbol in Beattie’s work is the ziggurat, the ancient huge architectural structure in ancient Mesopotamia of a geometric stepped tower leading to a shrine or temple. Both are quests for spiritual salvation and transformation, but in Beattie’s work, his ladders go nowhere, they lead at best to a dark, murky, ghostly grey mist of ink or paint – darkness and abstract shades of black. The marks of his paintings are controlled but are also furious, expressions of frustration and uncertainty. There is no heaven, the present is a path to nowhere. This is a journey within, lost, and perhaps without hope.

Frances Aviva Blane’s work shares some common ground with Beattie, both find the medium of expressive painting, as both action and image, as journeys within the self. Where Beattie’s work may be more Jungian – universal, mythic, religious symbols – Blane is more Freudian. She excavates the struggling fury with the human self, colour is aggressively applied without formal shapes or boundaries. Blane’s drawings liberate the impulsive and irrational unconscious and assaults our “reality principle” (to quote Freud). Emotionally charged by a physical energy, the drawings on display have no explicit external references. Are they responding to our social/political environment? Are they a cri-du-coeur? Blane’s Blue black head (charcoal/acrylic/waterford, 76x56cm) is awash with intense, scribbling vivid colours.  A blotchy red, messy blues and yellows, the black charcoal marks out hair, eyes and lips that hints at a self-portrait of the artist. It’s an unsettling face. Other drawings by Blane have the black charcoal attacking and assaulting the surface, blotching out colour. Not all the works are “full of sound and fury,/Signifying nothing” (Shakespeare, Macbeth). Blue (acrylic/tissue paper, 15x20cm) is a softer, delicate abstract drawing, the shades of blue convey a far more tranquil inner landscape, like a musical interlude, a calm between the storms.

Our lives are saturated and bombarded with real and hyper-real representation. Like Thomas Jerome Newton (performed by David Bowie) in The Man Who Fell to Earth (1976) who sits transfixed to a bank of TV screens, we too are hypnotised and consumed by digitised mass media. “Leave my mind alone! get out of my mind, all of you!” Newton screams, like a tortured soul, at the 12 TV screens. The selfies, the glamour, the material opulence which bombard us on social and mainstream media make us want to scream at the digital screen. There are darkness and storms within us, and there is a human desire to seek something beyond, as we climb the ladder, walk along paths leading to God knows where.

Beattie and Blane are important voices, reminding us that, through abstraction and expression, going beyond representation, social commentary and observation, we seek meaning and experience beyond our material world.

Manick Govinda is a freelance art writer, artists mentor, lecturer, curator and cultural commentator. His writings have been published on a number of platforms and publications. You can find his writings and media appearances online on Authory.